A very attractive and important early 19th century open corner mahogany display cabinet. The moulded pointed arch above three shelves with a mirror glass back. Each shelve with a very fine chiseled gilt bronze palmettes frieze. To the sides two carved palmtrees, painted in dark green and gilded. At the corner back a further palmtree, entirely gilded. At the bottom a secret compartment, opening with two doors.

The Berlin artdealer and publisher Ludwig Wilhelm Wittich (1773-1832) issued between 1823 and 1830 a magazin with furniture and interior designs (”Magazin für Freunde eines geschmackvollen Ameublements”). It shows many plates with Empire and Biedermeier furniture, such as console tables, chairs, desks, cabinets, etc. The design for this corner display cabinet is illustrated and described in the issue no. 7, plate 39 (see photograph).

An almost identical corner cabinet has been documented in 1922 belonging to the inventory of palace Perkata (countess Therese Györy). A center table with legs in the form of the same palmtrees was part of the palace Friedenstein in Gotha (part of a palmtree salon), see photographs.

The exotic motif of the palmtree can be found on European decorative arts through history. In particular from the 18th to early 20th century, where sometimes entire rooms were decorated with palmtrees. Examples can be found for example at the Palm Room, New Palace, Bayreuth, Germany; the Palm Room, Spencer House, London or the Palm Room of Schloss St. Emmeram, the Bavarian estate of the Thurn und Taxis.

Display cabinets have been extremely popular from the Empire to the Biedermeier period. A practical and yet attractive piece of furniture, for displaying decorative objects, such as porcelain. 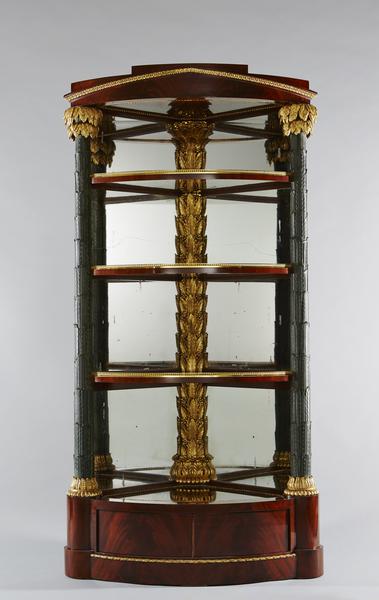