A Taste for Splendour

Viebahn Fine Arts is showing and offering eight precious Russian malachite objects from the early to late 19th century from a German private collection. Among other things, there is an important encrier and two boxes formerly in the possession of Dagmar, princess of Denmark, later Empress of Russia, an mother of Emperor Niclas II. of Russia. 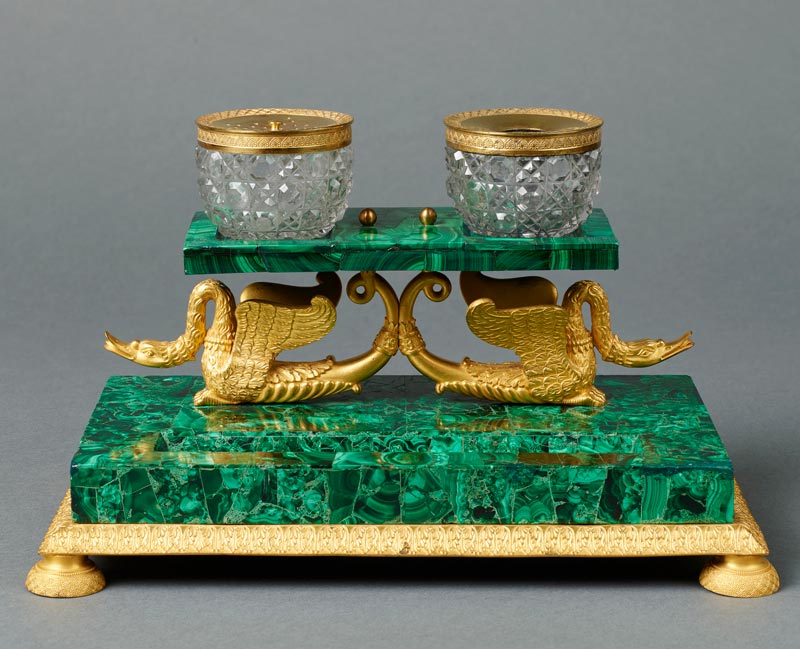 Malachite artefacts are characteristic of the rich and refined taste of early 19th century Russia. Master craftsmen worked on this material using the “Russian mosaic” technique: they cut it up into small plaques which they then melded together and polished, creating the illusion that the object was made out of a single block of material, thanks also to the subtle interplay of lines produced by the veins of the stone. These artefacts were often embellished using rich gilded bronze framings, which created wonderful effects of light and contrast.

Founded in 1725 near the summer residence of Peterhof, and thanks to the expanding quarries extracting stones needed to build both churches and magnificent palaces, the Imperial Manufacture of semi-precious stones reached its moment of highest splendour in the 19th century, to the point that its work was also displayed at both Russian and international Expositions, proving a great success.

Alongside its new workshops in Ekaterinburg and Kolivan, founded respectively near the Urals and Altai mountains so as to treat the stones closer to their locus of extraction, the Peterhof Manufacture produced many pieces throughout the 19th century, destined mostly to the Imperial court, and more rarely to private clients.

In this prestigious production, malachite became one of the Tsar's favourite materials, and thus famous internationally, as he often brought it as a wedding or diplomatic gift to many of Europe's rulers, particularly in Germany.