The monumental rectangular standing chest with full-height stiles, extensively mounted with wrought ironwork straps terminating in lily finials which ’wrap’ around the chest edges. These are fixed with convex head nails: running vertically up the front seven straps; running around both sides, five C-shape horizontal straps; running from the back to the front of the lid eleven long straps. The ironwork with some remains of an originally red painted surface. In addition, running along the edges of the lid at the front and sides is a plain iron band, close-nailed.

On the chest front, centrally placed, is a quatrefoil iron lockplate with four corner trefoil finials, which receives a corresponding external hasp fitted to the lid. Below the floor of the chest, the two front legs are finely carved on the front face, in low relief with a rectangular ’panel’ depicting ornaments taken from Gothic architecture, two arcades of small arches are enclosing a half quatrefoil terminating in a fleur de Lys.

The lid is very heavy and is supported on five substantial iron strap hinges that extend right down the back of the chest. Inside the chest at the left end is a shelve, to the right is a shallow, oak till (orginally with a now lost lid).

This is an atmospheric piece of furniture, which shows signs of its great age. There is wear and evidence of (inactive) worm to the core carcase, in particular to the back stiles; however, the wood is still very solid. Considering its age of more than five hundred years, this late medieval chest is in a very good condition with a historical patina.

Baumeier argues that ’stollentruhe’chests were commissioned by the urban bourgeoisie (for example rich merchants and farmers), especially for a new wife’s trousseau. They were used by both women and men, principally used for clothing and textiles but also containing weapons (harness and swords), documents, jewellery and money. After the death of the owner the contents (if clothing or metal objects) is sometimes recorded as remaining in the chest until the heirs come of age. They are generally fitted with a lockable container (Beilade) or till at the right or left side. Unfortunately no contemporary image of a room with a Westphalian studded chest with iron fittings has been found. 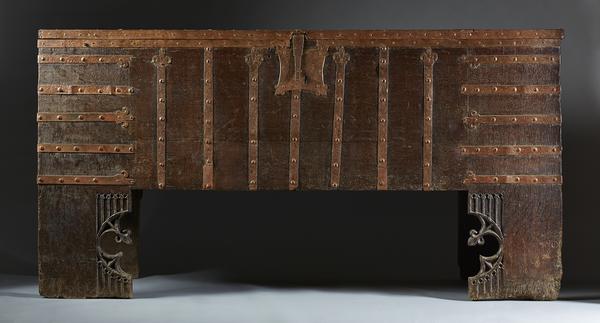