Emil Wolff (Berlin 1802-1879 Rome) from 1815 he studied at the Berlin Academy of Arts, from 1817 to 1822 he worked as a pupil and assistant in the studio of his uncle Johann Gottfried Schadow in Berlin, since 1822 as a fellow of the Berlin Academy in Rome, where his primary task was "to perfect his art" (Friedrich Wilhelm III.).

In Rome, where he was based for the rest of his life, Wolff took over the studio of his deceased cousin Ridolfo Schadow. He was in close contact with German archaeologists and soon developed a special talent in the art of restoration of antique sculpture. Through his contacts with the heads of cultural life in Berlin, like Rauch in Schinkel, Wolff was able to arrange purchases of antiquities for the Prussian royal collections. Since 1832, Wolff was a foreign member of the Berlin Academy of Arts, where he made his debut in 1818 and exhibited from then onwards several times until the end of his life.

His prominent role for the artistic life in Rome, was honored in 1871 with the appointment as President of the Accademia di San Luca. Wolff carried out this important honorary post, which had not fallen to neither a foreigner nor a Protestant since Thorvaldsen, until his death.

The artistic development of Emil Wolff was influenced by two major personalities: in Berlin by Johann Gottfried Schadow (1764-1850) and in Rome by Bertel Thorvaldsen (1770-1844); he was also influenced by the softer, more naturalistic classicism established by Christian D. Rauch (1777-1857).

Wolff’s main clients were the Prussian court and in particular the English and Russian aristocracy, whose representatives made his studio to a popular meeting place for Grand Tour travelers in Rome. In the 1830’s and 40’s Wolff created numerous important works of art; most of them are now in major international museums collection, from Berlin to St. Petersburg. Relevant part of the success of the talented ,Berliner in Rome’ had over the decades a close relationship with the English royal family, among others, Wolff created several busts of Prince Albert (Saxe-Coburg-Gotha) and his wife Queen Victoria.

Since 1822 Wolff lived in Rome and married on the 24th of August 1835 , the Roman artist model Maria Margherita Guaviglia (around 1810-1879). In the year of marriage Wolff created a portrait bust in marble of his young wife (height and name unknown, lost), mentioned in the Acta Leoni, the longtime secretary of the Accademia di San Luca. It seems very likely, that he made his self-portrait at the same occasion, and possibly as a counterpart.

The recent discovery of the unknown self-portrait of the German-Roman sculptor Emil Wolff is very interesting, as only his late portrait1 was previously known. It shows the artist at the age of 74 and is kept in the sculpture collection of the Accademia di San Luca, the center of neoclassical theory and practice in Rome. 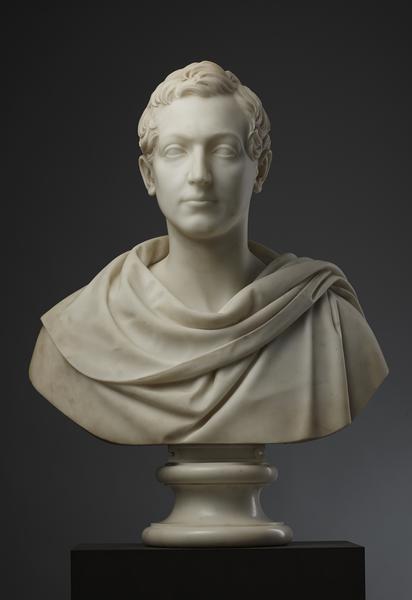