The giltbronze and patinated figural Napoleonic mantel clock, the drum mounted within a patinated swan, the white enamel dial with Roman hours and Arabic quarters, pierced ormolu hands, the eight-day movement with silk suspended pendulum and countwheel hour and half-hour strike on bell. Rectangular base decorated with a central eagle within laurel wreath.

”Although the swan is mainly known as the animal chosen by Zeus to seduce Leda, it is also an attribute of Apollo, since on the day of his birth these sacred birds flew seven times around the island of Delos, where his mother, Leta, had taken refuge. It is they who pull the chariot given by Zeus to Apollo.

Representations of the swan as an ornamental motif were very frequent in Roman art, then disappeared almost completely until they reappeared under the Consulate. Josephine purchased several swans for the park at Malmaison, including some black ones from southern Australia.

An elegant, ambiguous animal that could both fly and swim and was regarded as voluptuous, the Jupiterian swan of the myth of Leda was also an allegory of love and symbol of feminine seduction, probably owing to the pure whiteness of its plumage and the curvature of its neck.” (See: Symbols of Power, Napoleon and the Art of the Empire Style 1800-1815, by Odile Nouvel-Kammerer, New York, 2007).

This clock model is very rare and to our knowledge no other examples are published. 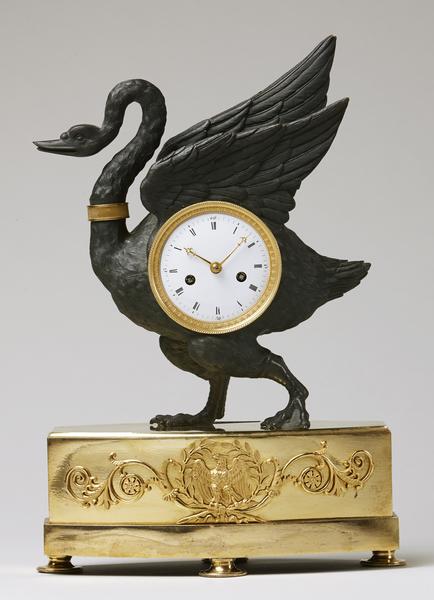