The movement is contained in a white marble obelisk which is surmounted by an armillary sphere finial. The front with a panel chased with nymphs supporting a globe with Cupid standing on top; below are two sphinx, their bodies covered in drapery. Bands of beading run down the angles of the obelisk. The rectangular base with a mille raie mount, resting on four circular feet, on a black marble base of posts connected by chains and on flattened bun feet. The signed white enamel Arabic dial with pierced ormolu hands. The large three-week going movement strikes the half- and full hours.

This clock was exhibited in 2009-10 at the Wallraf-Richartz-Museum, Cologne and published in the exhibition catalogue ”Mit Napoleon in Ägypten, Die Zeichnungen des Jean-Baptiste Lepère” , nr. 140. 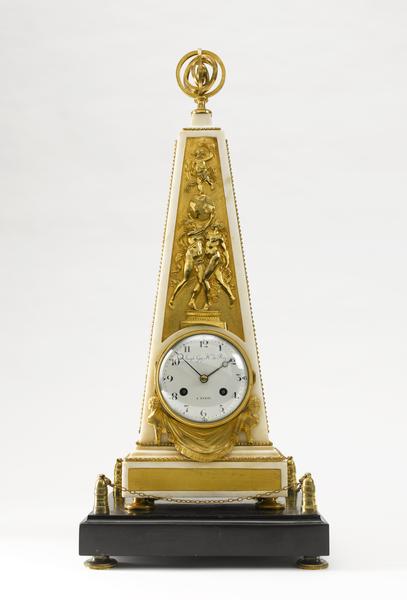