The circular white-enamelled dial signed ”Detour Paris” with Roman hours and Arabic quarter marks, a further inner Arabic chapter ring for the day of month. Pierced gilt hands and a blue steel date hand. The three-week movement strikes the hours and half hours. The circular drum case rests on a plinth, the front of which is set with an ormolu panel chased with cherubs playing with doves, it is surmounted by an eagle and flanked by patinated bronze figures personifying Philosophy and Study, (’La Science’ and ’L’Etude’), the shaped rectangular base with rounded ends, mounted with a central pierced ormolu panel chased with scrolling foliage, flowers and cherubs and centred by a bearded mask. With two roundels containing female classical masks. The clock rests on six circular gadrooned feet decorated with acanthus leaves.

This clock, entitled ”L’Étude et la Philosophie” was an enormously successful and popular model in the late 18th Century. It derives from a drawing in a catalogue produced by François Rémond, circa 1785, which incorporates figures designed and supplied to the Sèvres factory for reproduction in biscuit porcelain by the sculptor Simon-Louis Boizot.

Rémond was one of the most celebrated ciseleurs-doreurs during the reign of Louis XVI and counted amongst his distinguished clientele the comte d’Artois and the princesse Kinsky. Between February 1784 and October 1787, Rémond sold at least thirty-two versions of this model to Dominique Daguerre. In 1788 Daguerre delivered three of these clocks to Louis XVI at the château de Saint-Cloud. 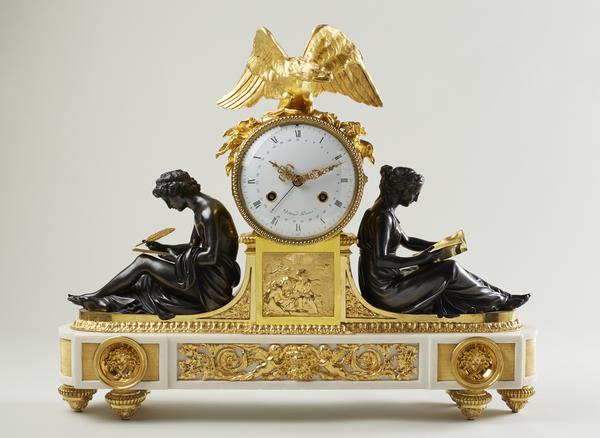