The clock case decorated overall with very fine ‘Vernis Martin’ lacquer paint with floral sprays and garlands. The waisted case with pierced foliate bronze mounts and surmounted by a foliate finial with a bird. On scroll feet, the bracked conformingly mounted and decorated with a scene with dogs. A fine three week going movement, striking half and full hours on a silvered bronze bell. Festeau Le Jeune became master in 1769. Clockcase and bracket are stamped by the ebenist ‘A. Gosselin’ (Antoine Gosselin 1731-1794, Paris, master in 1752), as well as the the stamp of the Parisian gilt ‘JME’.

In French interior design, Vernis Martin is a type of lustrous lacquer substitute widely used in the 18th century to decorate a wide variety of items from furniture and coaches to such personal articles as fans and snuffboxes. The technique was named after the French brothers Guillaume and Etienne-Simon Martin, who perfected the process, but covers work by other craftsmen as well. Highly praised by Voltaire, it was developed to imitate East Asian lacquerware being imported into France during the Louis XV period. Vernis Martin was made in several colours, green and a golden red being the most characteristic. 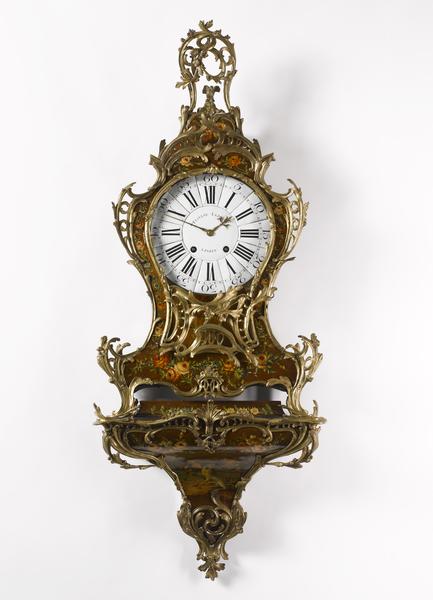