Depicting Jason capturing the Golden Fleece, the young warrior reaching into a tree branch for the fleece with the slain hydra at his feet, the tree centering the ormolu dial with Roman chapter ring, on a rectangular base with animal paw feet. The three-week going movement, striking half- and full hours.

The clock, evoking ancient virtue personified by the History of Jason and the Golden Fleece, depicts the Thessalian hero of the Alexandrian poet Apollonius Rhodius, Argonautica in the act of retrieving the ram fleece from the bough of an oak tree. Its guardian draco-serpent sleeps at his feet; while Jason’s shield, providing the clock-face, features a bas-relief of Medea providing juniper, with which Jason drugged the serpent. A version of this clock model is in the chateau de Malmaison in the former bathing room of the Empress Josephine, inventory number: MM.40.47.470. Another example is in the former bedroom of King Joseh in the Royal Palace in Madrid and illustrated in J. Ramon Colon de Carajal, Catologo de Relojes del Patrimonio Nacional, Madrid, 1987, p. 186.

This mantel clock is published in: Ottomeyer-Pröschel, Vergoldete Bronzen, I, page 351. 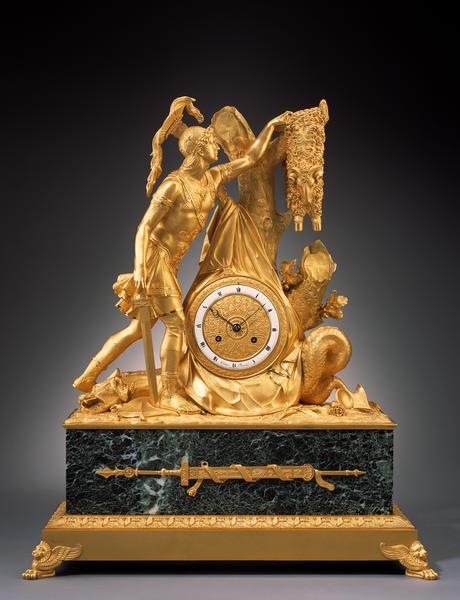