Claude Galle, (1759 – 1815, master in 1786) is one of the most renowned bronziers active during the Napoleonic period, such as Pierre-Philippe Thomire, André-Antoine Ravrio and Louis-Stanislas Lenoir-Ravrio. He supplied both the royal household before the Revolution and the imperial household. Other examples of this clock can be found in the Dutch Royal Collection and at Peterhof, Saint-Petersburg.

The circular glazed enameled dial with black painted Roman numerals for the hours and fifteen-minute intervals in Arabic numerals, separated by the line of one minute markings, and set within an octagonal plinth surrounded by flowers and foliage. A large, almost four week going movement, striking half- and full hour. Two-toned, gilt-bronze cast,finely chased. Rectangular dark green marble base, supported by bun feet. The enamel dial is also signed on the back: ”Dubuisson, Émailleur, Rue de la Calandre, vis-à-vis celle St.-Eloy. No – 17.”

Depicted from the epic, Iliad, the Trojan hero, Hector shields his wife, Andromache, who presents him with their son, Atyanax, upon his departure. The warrior’s expression contrasts to his wife’s agony, as she forewarns of his pending death in combat.

Three bas-reliefs decorate the rectangular plinth, the, central, and largest of which depicts Hector asking his brother Paris to defend their city. This scene is flanked by allegories of love and loyalty.

Literature; this clock is pulished in the following books: 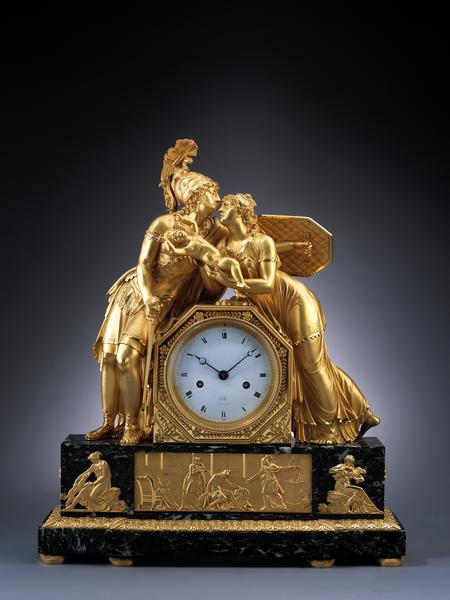